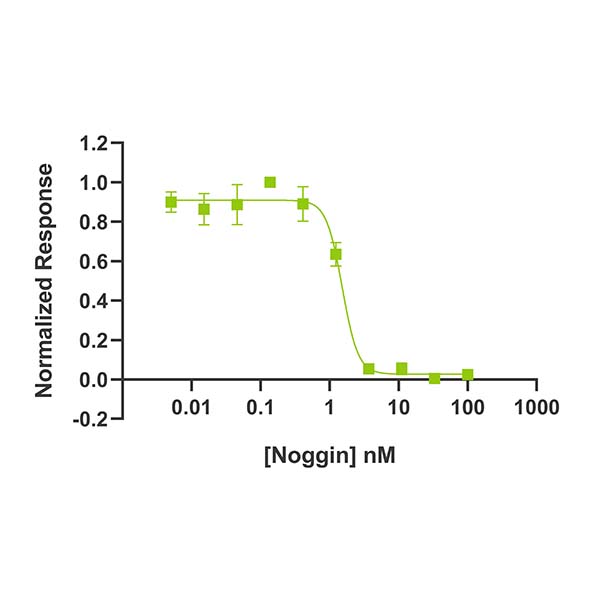 Noggin is a BMP inhibitor and its activity is determined by inhibition of BMP2 (Qk007) activity in a BMP-2 responsive firefly luciferase reporter assay.

HEK293T cells are treated (in triplicate) with a serial dilution of Noggin and standard concentration of BMP2 for 6 hours. Firefly luciferase activity is measured and normalized to the control Renilla luciferase activity. Data from Qk034 lot #104291, EC50 = 72.8 ng/ml (1.57 nM). 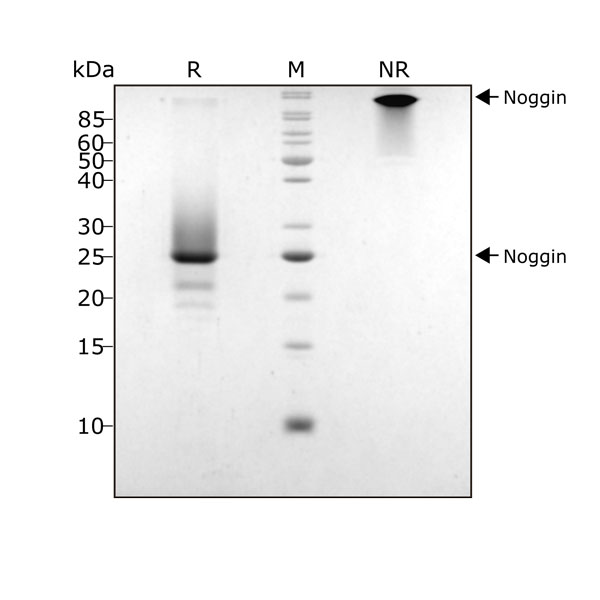 Noggin protein (Qk034) has an unusual migration in non-reduced (NR) SDS-PAGE due to the non-covalent dimer which is the active protein. Similar migration in SDS-PAGE is seen for Gremlin-1, a related BMP antagonist. The identity of the purified dimeric protein was confirmed using mass spectrometry. Upon reduction, the protein monomer migrates at 23 kDa

Noggin is an extracellular antagonist of BMPs (part of the larger TGFβ family); noggin binds and inhibits BMP-2, -4, -5, -7, -13, and -14 with varying affinities.1 Noggin binds these BMP ligands, preventing interaction of the ligands with their receptor, and consequently blocking downstream activation of signalling cascades.

Through its control of BMP signalling, Noggin plays a crucial role in embryonic patterning, as well as in the development of the neural tube, teeth, hair follicles, and the eye.1 In culture noggin is used in the maintenance of pluripotent stem cells, differentiation of iPSCs to neural lineages, and in a large variety of organoid culture systems including intestine, liver and lung organoids.2