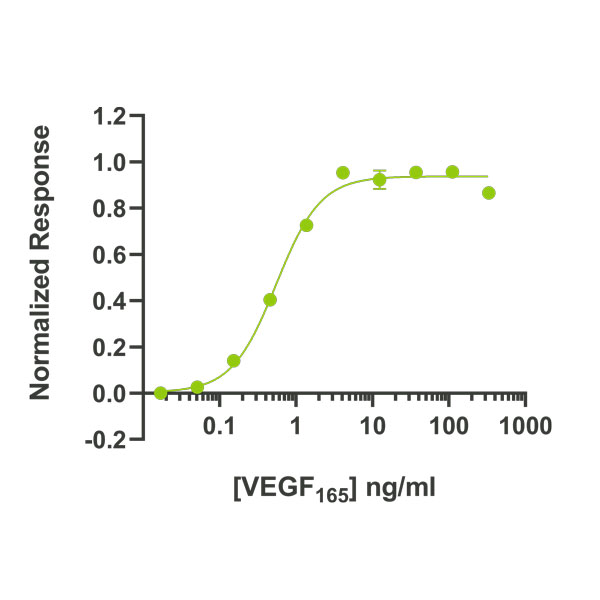 The bioactivity of VEGF165 is measured using a luciferase reporter cell line which stably expresses the KDR (VEGFR-2) receptor. Cells were incubated with different concentrations of VEGF165 for 6 hours before assaying for luciferase production. 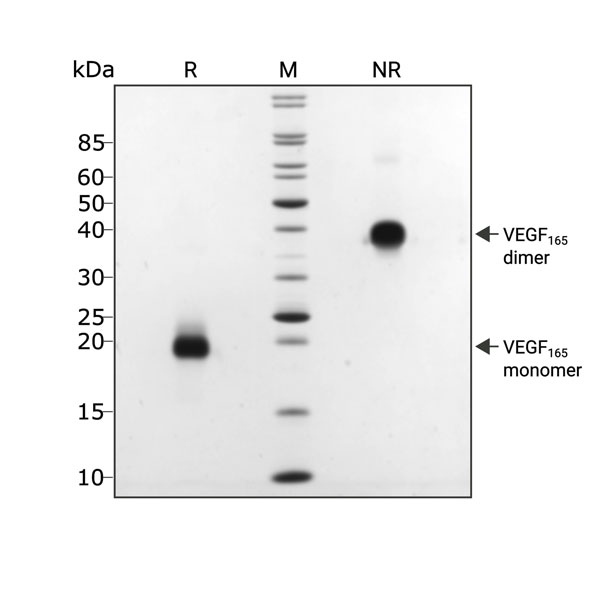 Human VEGF165 (Qk048) migrates as a dimer at 38 kDa in non-reducing (NR) conditions and as a monomer at 19 kDa upon reduction (R). No contaminating bands are visible.

Qkine VEGF165 has higher bioactivity than an alternative supplier.

The bioactivity of Qkine and an alternative supplier of VEGF165 were compared directly using a luciferase reporter cell line which stably expresses the KDR (VEGFR-2) receptor. Cells were incubated with different concentrations of VEGF165 for 6 hours before assaying for luciferase production.

Vascular endothelial growth factor (VEGF) is a member of the platelet-derived growth factor (PDGF) family and signals through the type I transmembrane receptor tyrosine kinases VEGFR1 (also called Flt-1) and VEGFR2 (Flk-1/KDR). Some VEGF family members (including VEGFA 165) also bind to the co-receptors neuropilin 1 (NRP1) and neuropilin 2 (NRP2), which can stimulate VEGFR2 activation. It is characterized by the presence of eight conserved cysteine residues forming a receptor-binding cystine-knot structure [1].
VEGF-165 is a core regulator of angiogenesis and vasculogenesis. It is responsible for the survival, proliferation, migration, and specialization of endothelial cells, thus called an endothelial cell surviving factor [2]. VEGF 165 has multiple roles in the CNS, such as stimulating neural stem cell (NSC) proliferation and promoting neurogenesis [3]. VEGF enhances the migration of oligodendrocyte precursor cells, increases migration and proliferation of Schwann cells, stimulates expression of trophic factors by astrocytes, and triggers proliferation, survival and migration of astrocytes and microglia [4]. It is a critical factor in generating human pluripotent stem cell- (iPSC- or ESC-) derived vascularized brain organoids [5]. Immunocytochemical staining with CD31 expression marker is used to indicate the presence of endothelial cells, thereby suggesting successful endothelial cell differentiation [5]. VEGF also plays a role in bone formation, regulates mesenchymal stem cell differentiation, and serves as a survival factor for chondrocytes, hematopoietic stem cells, and tumor cells [6].
In humans, VEGF is produced as multiple alternately spliced isoforms. Nine major VEGF‐A isoforms have been identified in humans: VEGF121, VEGF145, VEGF148, VEGF162, VEGF165, VEGF165b (an anti-angiogenic isoform that binds to VEGFR2 with similar affinity to VEGF165 but does not activate it), VEGF183, VEGF189, and VEGF206.
VEGF165 is the most abundantly expressed isoform [7], also known as VEGF-A 165a. Qkine recombinant human VEGF165 protein is a highly pure and potent 38 kDa homodimer, disulfide-linked consisting of two 165 amino acid polypeptide chains. It is an animal-derived component-free (ADCF) and carrier protein-free (CF) isoform of VEGF for high efficiency.

Page load link
We use cookies to ensure that we give you the best experience on our website. Please continue to use this site and we will assume that you are happy with it.AcceptPrivacy policy
Go to Top