Human NRG-1 (Neuregulin 1) protein is frequently used in the maintenance of human pluripotent stem cells.  In addition to its widespread use in stem cell culture media, NRG-1 (also known as Heregulin-β1 , HRG-1) has essential roles in vivo including in nervous system, cardiac, and mammary gland development; cancer biology and neurological disorders. 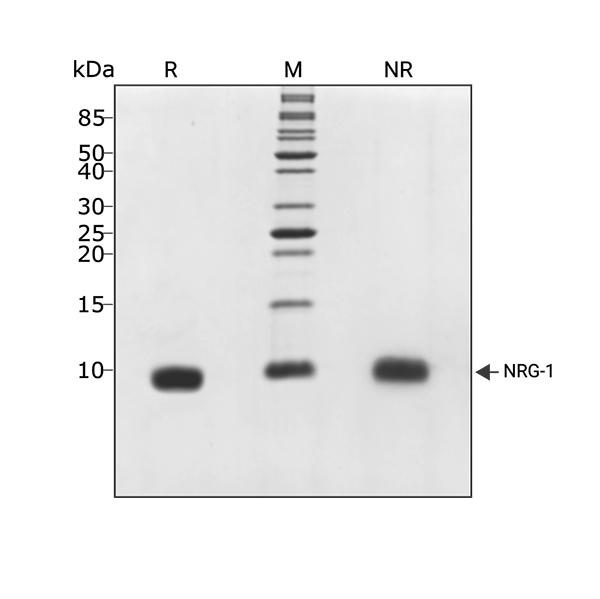 NRG-1 migrates as a single band at 7.5 kDa in non-reducing (NR) conditions and upon reduction (R).  No contaminating protein bands are visible.

Neuregulin 1 (NRG-1) is a member of the neuregulin family (along with NRG 2-4). Each member of this family is encoded by an individual gene.  Alternative splicing and different promoter utilisation results in a large number of isoforms for each member of the protein family – for example, NRG-1, the best studied member, generates six types of protein (I–VI) and at least 31 isoforms.1 These isoforms have different tissue distribution, potency, receptor specificity and biological functions.2

All NRG-1 isoforms contain the bioactive EGF-like domain, this EGF-like domain has two isoforms: alpha and beta. These differ in their receptor affinity; both the alpha and beta isoforms are ligands for the receptors ErbB3 (HER3) and ErbB4 (HER4), however the NRG-1 beta isoform has a higher affinity for the ErbB4 receptor than the alpha isoform.3 This protein (Qk045) consists of the β isoform of the EGF domain of NRG-1 protein.

NRG-1 has an essential role in cardiac and neuronal development, and is implicated in disorders such as schizophrenia,4 and numerous cancers, for example breast cancer where NRG-1 promotes the proliferation and migration of breast cancer cells.5  In cell culture, NRG-1 is frequently used in maintenance media for human pluripotent stem cells and other cells.