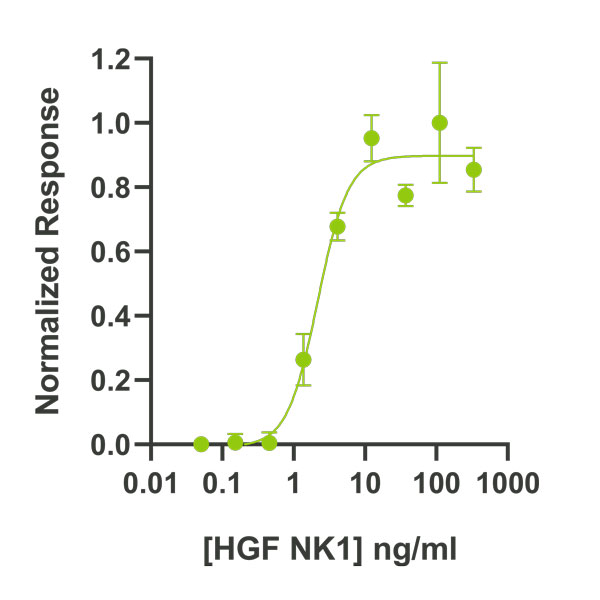 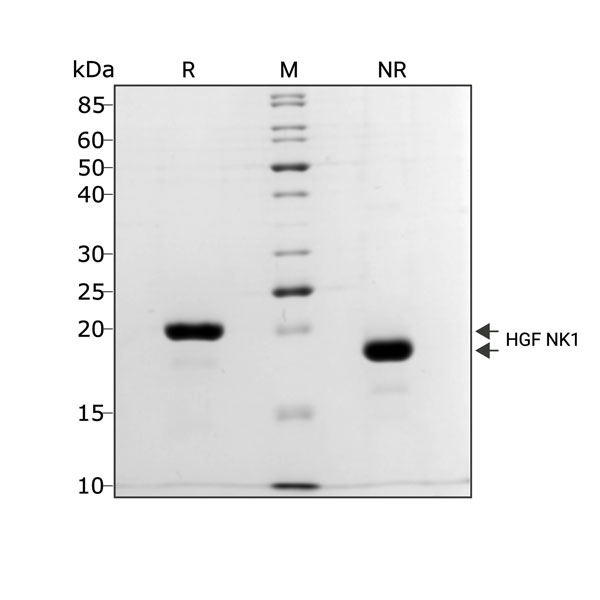 HGF is secreted as a single inactive polypeptide and is cleaved by serine proteases into a 62-kDa heavy-chain and 32-36-kDa light-chain. A disulfide bond between the heavy and light chains produces the active, heterodimeric molecule.2 Alternative splicing of HGF produces multiple transcript variants encoding different isoforms. The NK1 isoform is the smallest naturally occurring splice variant, comprising the N-terminus and first kringle domain.3

Bovine HGF has been extensively studied for its role in muscle development. HGF is known to be involved in the proliferation of satellite cells, which are key components of skeletal muscle growth. HGF has also been observed to enhance the formation of myoblasts and induce cell fusion, leading to an increase in muscle mass and strength. Furthermore, bovine HGF increases myofibrillar protein synthesis and can help restore the normal structure of muscles damaged by injury or disease. HGF may also play a role in regulating inflammatory responses during tissue repair. In addition to its effects on skeletal muscle, HGF has also been shown to have diverse activity in other tissues such as liver, brain and kidney.

The use of HGF in cultivated meat production and cell culture media optimization is an emerging field. HGF has been shown to increase the efficiency of cell proliferation and differentiation, while also improving adhesion properties during the scale-up process. HGF has also been observed to improve cell attachment and survival in various cell types such as skeletal muscle cells and cardiomyocytes. In addition, HGF supplementation in optimized or serum-free media formulation has been effective for optimizing cell culture outcomes for several cell types in basic research studies or biopharmaceutical applications.
Human HGF and bovine HGF proteins share many similarities in terms of structure and function. However, there are certain differences between the two proteins. Bovine HGF has a much lower molecular weight than its human counterpart, as well as different biochemical properties such as higher solubility and stability. Furthermore, the bovine HGF gene contains a longer leader peptide sequence that increases its translational efficiency compared to the human HGF gene. In addition, the binding affinity of bovine HGF for tyrosine kinase receptors is significantly higher than that of human HGF, indicating that it may be more potent in mediating biological effects than human HGF.

Multiple isoforms of bovine HGF have been detected, thought to have a role in a range of biological activities and cellular responses. For example, some HGF isoforms have been observed to stimulate cell proliferation while others modulate inflammation or enhance muscle growth and repair. Less is known about the functions of HGF isoforms in bovine systems than human development. The variety of HGF isoforms present in bovine HGF increases its potential to regulate a wide range of physiological processes and may contribute to its efficacy as an ingredient for cultured meat production.

Qkine HGF (NK1) is produced in an animal-free microbial system that is compatible with production at scale. We are expanding our range of innovative growth factors for cellular agriculture and cultivated meat media development to support advances in the field, please reach out to cellag@qkine.com to discuss collaboration opportunities.

Bovine HGF differs from human HGF at several key amino acid residues that are predicted to affect bioactivity and receptor binding. Clustal Alignment showing sequence variation between HGF NK1 from different species. Note the lack of structural conservation at key residues, which is predicted to impact receptor binding and activation. 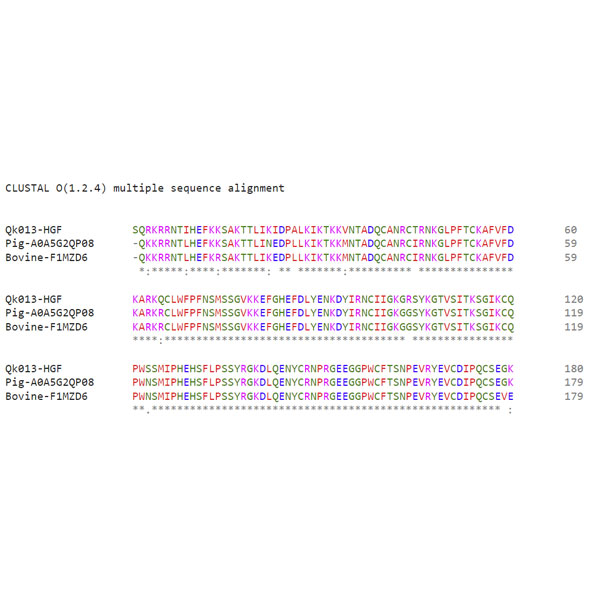