Recombinant R-spondin 1 LR5 protein is engineered to act as a high affinity ligand for the LGR5 receptor.  In epithelial tissues LGR5 marks the stem cell population.  This engineered protein, R-spondin 1 LR5, activates wnt signalling only in the LGR5+ stem cell population.  R-spondin1 LR5 has been tested in intestinal organoid culture and supports organoid survival and growth. As LGR5 specifically marks stem cells and is not found on transit amplifying cells, the lower crypt multiplicity seen in organoid cultures with R-spondin 1 LR5 (in comparison to wild-type R-spondin 1, Qk006) supports the notion that this engineered form is acting specifically on stem cells.  This specialized form of R-spondin 1 was developed in Marc de la Roche’s lab (University of Cambridge).

Orders are typically shipped same or next day (except Friday). Easy world-wide shipping. 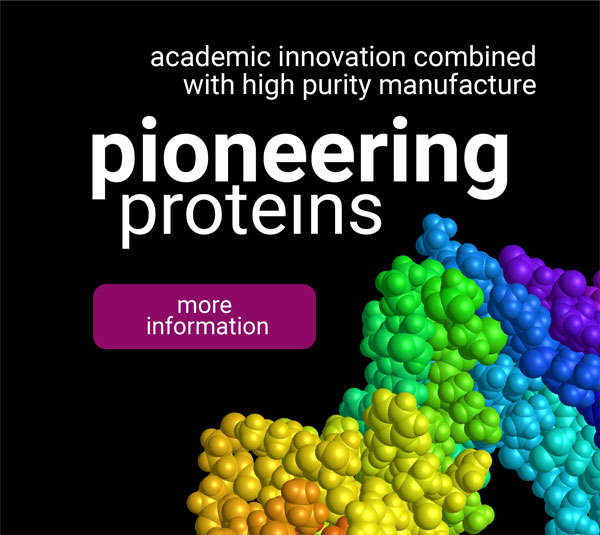 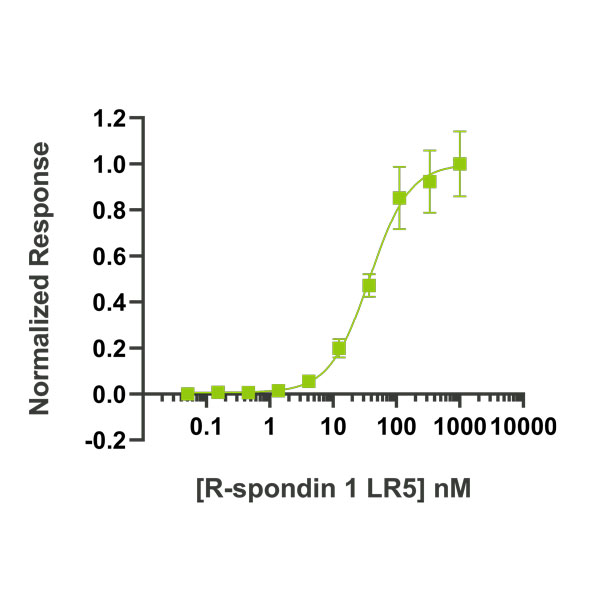 R-spondin 1 enhances Wnt signalling in TOP-Flash reporter assay.   HEK293T cells transfected with Wnt-responsive firefly luciferase reporter TOP-FLASH are treated with increasing concentration of Qk031 R-spondin 1 LR5 (diluted in DMEM with 0.5 % of FCS), in the presence of Wnt-conditioned media (1:8 dilution), in triplicate. Cells are grown overnight and luciferase activity measured by luminescence. Data from Qk031 lot #104286.  EC50 = 47.2 ng/ml (38 nM).  The higher EC50 than observed with wild-type R-spondin 1 Qk006 (72.7 ng/ml, 6nM) is due to the receptor population on HEK293 cells. 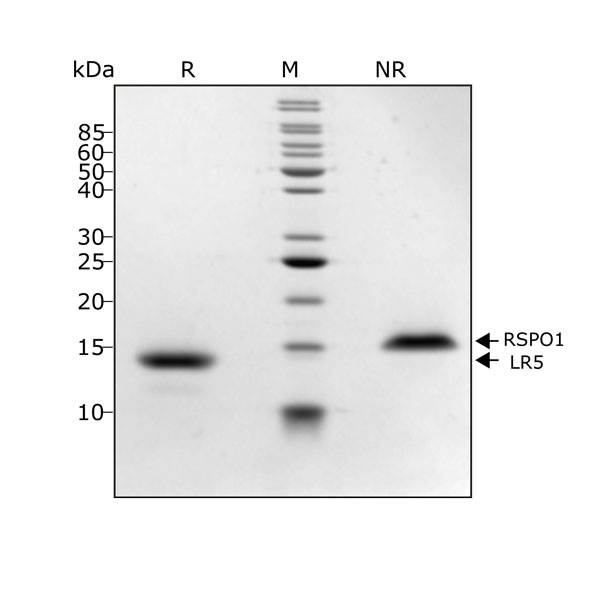 R-spondin 1 LR5 migrates as a single band at 16 kDa in non-reducing (NR) and 13 kDa in reducing (R) conditions. 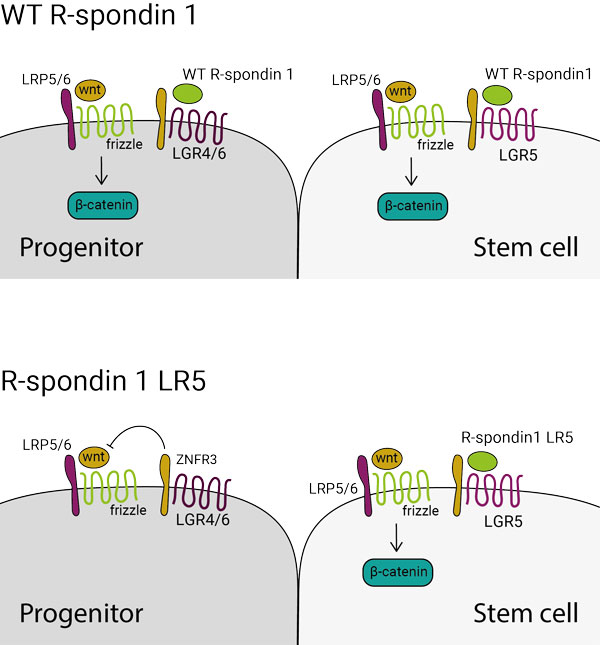 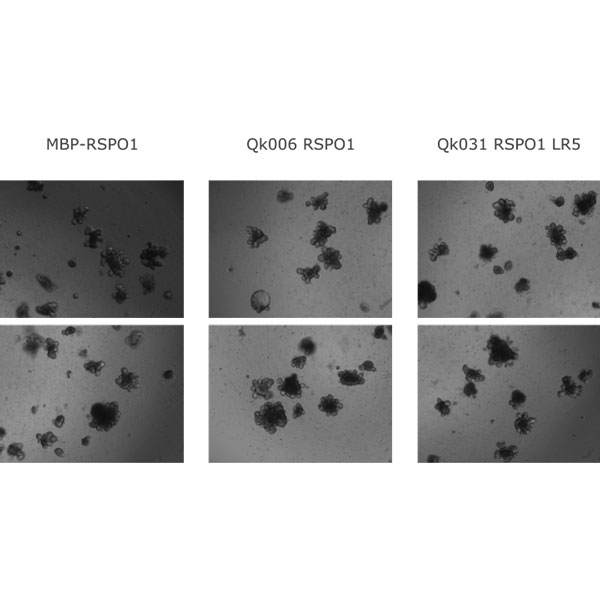 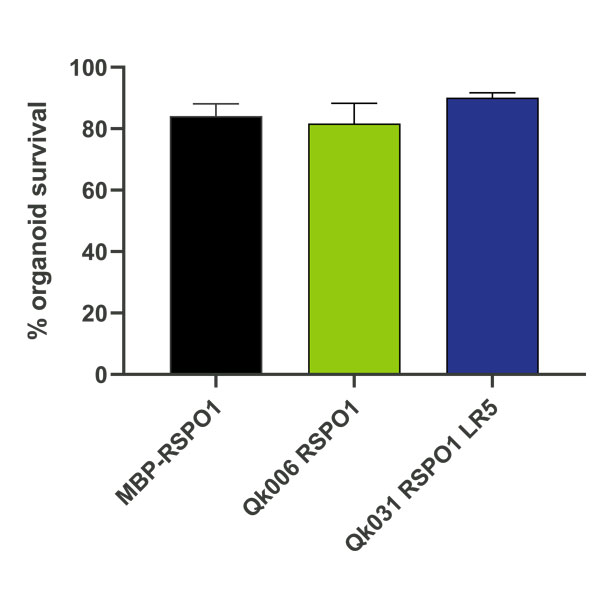 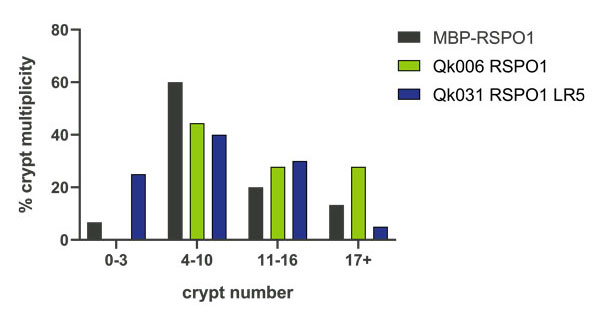 Qk031 is a specialized form of R-spondin 1 that specifically binds to the LGR5 receptor, which was developed in the lab of Marc de la Roche (University of Cambridge).  R-spondin 1 (Qk006) is a ligand for the leucine-rich repeat-containing G-protein coupled receptors (LGR) 4-6. Binding of R-spondin 1 to its coreceptors, LGR4-6 and ZNRF3, releases the inhibition ZNRF3 imposes on wnt signalling.

This is part of our pioneering proteins range where the full range of activities and applications of this novel protein have not been determined.

Qk031 is an engineered form of R-spondin-1 with higher affinity for the LGR5 receptor and lower affinity for LGR4.  The aim is to specifically target Wnt-3a signalling in the LGR5+ stem cell population in intestinal organoids.

you may also find useful