What is a luciferase reporter assay and how does it measure bioactivity?

To determine this bioactivity, a vector containing a firefly luciferase gene under the control of a growth factor appropriate regulatory region is introduced into cells, such as HEK293Ts. These are then incubated with a dilution series of the growth factor. After a defined incubation period, the bioactivity is measured by quantifying the enzymatic activity of luciferase. This involves lysing the cells and adding the luciferase substrate, luciferin. The amount of light emitted from the reaction is directly proportional to the amount of luciferase in the sample and consequently can be used as a measure of the level of response the growth factor imparts on the reporter gene. In our QC experiments, we also quantify Renilla luciferase which is expressed constitutively. This acts as a normalization control for transfection efficiency and the cell number in each well. The growth factor response can then be expressed as a firefly/Renilla ratio. Plotting concentration vs. F/R ratio allows an EC50 (half-maximal effective concentration) to be calculated.

When shopping for growth factors, you want to confirm that the protein has been established to be consistently bioactive across multiple lots, ensuring each lot you receive will be equally as active as that reported. Our quality control process includes validation with a previous lot to ensure excellent lot-to-lot consistency (e.g. Figure 1). This consistency is essential when treating cells with growth factors to prevent experiment variability. The activity of a growth factor can differ significantly depending on experimental conditions. This means that comparisons between growth factors from different suppliers are tricky to make. At Qkine, we have validated most of our growth factors against other suppliers’ proteins under our experimental conditions to ensure that we are providing you with products that are as good as, or better than, those you may have used previously. 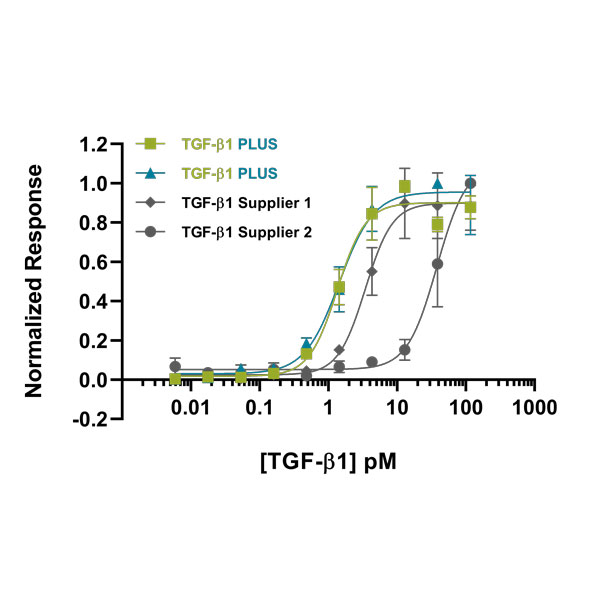